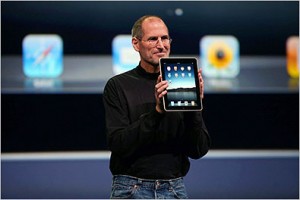 Steve Jobs dramatically changed the media landscape with pioneering products that will forever change the way news is consumed and distributed. As I prepare to moderate a panel next week on news and media trends at the National Press Club, I’m pondering the disruptive changes to the field, especially with Jobs’ death. I’m looking forward to delving into the topic with the journalists on the panel. In advance of that discussion, here are some thoughts from around the web on Job’s impact on journalism.

First, President Obama noting how many likely received news of Jobs’ death via an Apple product:

The world has lost a visionary. And there may be no greater tribute to Steve’s success than the fact that much of the world learned of his passing on a device he invented.

The iPod has been credited for saving the music business and Jobs believed that Apple products could give journalism a much needed shot in the arm. “I believe people are willing to pay for content. I believe in media, and in news content,” Jobs said.

On The Poytner Institute blog, Jeff Sonderman writes about how Jobs changed, but did not save journalism:

Most media companies have had to bend to the market created by Apple, as 88 percent of national U.S. newspapers have an iPhone app, and most that don’t already have an iPad app are probably planning on one… If you take him at his word, Jobs cares hugely about preserving journalism for journalism’s sake.”Anything that we can do to help The New York Times, The Washington Post, The Wall Street Journal find new ways of expression so they can afford to get paid, so they can afford to keep their editorial operations intact, I’m all for it,” he said at a 2010 conference.

And it should be noted that at that same conference (All Things Digital’s annual gathering), Jobs also stated: “I don’t want to see us descend into a nation of bloggers myself.” As a blogger, I take no offense. While social media has facilitated the transition to the current prosumer culture which ushered in citizen journalists and bloggers, professional journalists remain essential to our democracy.

With the introduction of apps and the app store, media companies of all kinds could provide a simple window into their content that wasn’t available before, instead of forcing users to come to their clunky mobile websites. Newspaper and magazine publishers scrambled to develop apps, partly in the hope that this new platform would convince their readers to pay for content, in the same way that iTunes and the iPod convinced music fans to pay for something they used to download for free.Those hopes were accelerated even further when word came that Apple was working on a magical new device called the iPad. Newspapers in particular salivated at the prospect of creating an “iTunes for news.” Many saw this as a way of turning back the Internet clock and charging users for content — something only a few publications such as The Economist and the Wall Street Journal have so far been able to get away with — and also a way of filling the revenue gap that was opening up between print advertising and online advertising. Unfortunately, even Apple can’t work miracles, and the number of publications making substantial sums from their iPad apps is virtually zero.

While the iPad may not have saved journalism, it’s clear that Jobs has had a tremendous impact on the field. In a 2010 Atlantic magazine article on How to Save the News, Google CEO Eric Schmidt predicted that in “five or 10 years, most news will be consumed on an electronic device of some sort.” If Schmidt’s forecast pans out, it’s likely most will agree that Apple’s iPad set the stage for a transformational shift of that magnitude to occur.