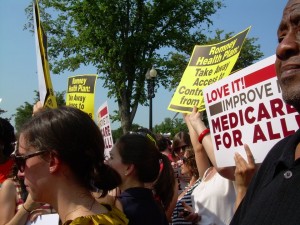 Passing the Affordable Care Act was no easy feat. The legislative and political battle over health reform was sharply drawn along ideological lines. After months of political wrangling and Tea Party protests that underscored fundamental differences on the role of government, the public option was off the table and anti-choice legislators nearly torpedoed the entire bill. This week in what some have called the ultimate showdown on “Obamacare,” the Supreme Court is hearing oral arguments on the constitutionality of the individual mandate and Medicaid expansion under ACA. The high court’s ruling, if it issues one at all, could strike down the entire law, which is already being implemented in 49 states.

So how did we arrive at this crossroad? For more than a century, Democratic presidents and progressive activists have sought to implement reforms to the nation’s health care system. The last major attempt by former President Bill Clinton was handily defeated by Republicans, leaving many disillusioned by the inability to achieve large-scale reform. While some argue that ACA does not go far enough in increasing competition in the marketplace or reducing health care costs, President Obama, in his first year of office, expended considerable political capital to advance the goal of universal and affordable health care coverage. Notwithstanding these criticisms, Obama and the Democratic-led Congress succeeded passing sweeping health care reforms that will expand coverage to nearly 32 million Americans.

ACA was modeled using the same “shared responsibility” framework of the Massachusetts health care law signed by then-governor and now Republican Presidential frontrunner Mitt Romney. The individual mandate is part of the three-legged stool of individuals, government and employers which achieved near universal coverage and a dramatic decrease in uncompensated care (heath care costs for uninsured) in Massachusetts. In 2009, less than 3 percent of residents were uninsured.

A central point of contention is whether Congress has the authority to require individuals to purchase health insurance and impose a penalty on those who do not. The government is relying on the Commerce Clause to argue the mandate is constitutional given that health care is an interstate activity since everyone will eventually use health care services. As Justice Kennedy noted today, this is an “actuarial reality that can and must be measured for health care purposes” since the costs of uninsured are shifted to those with private insurance or picked up by the government.

While the Civil Rights Act of 1965 and similar landmark legislation relied on Congress’ powers to regulate interstate commerce, and thus force businesses to comply, opponents of the mandate view it as an unprecedented encroachment on individual choice and freedoms. However, as in Massachusetts, the individual mandate under ACA is a tax penalty which according to a recent Urban Institute report will only affect 2 percentage of the population.

Because ACA prohibits health insurers from dropping sick subscribers and denying coverage on the basis of pre-existing conditions, proponents of the individual mandate argue it is necessary to prevent adverse selection, which would drive up premium costs. The individual mandate allows the government to spread the costs of the addition of unhealthy patients in the risk pool by requiring healthier people to purchase health insurance. Once ACA fully takes effect in 2014, most U.S. citizens and legal residents who are not covered through employer-based plans or public programs (the law extends Medicaid eligibility for millions) must obtain coverage through new state-based health insurance exchanges that will be created as result of the new law. Individuals and families with incomes between 133-400% of the federal poverty will qualify for subsidies (PDF) that reduce out-of-pocket costs.

The idea for an individual mandate was originally proposed by conservative health economists who sought to influence former president George H.W. Bush’s health policy strategy. In a 1991 Health Affairs article, Pauly and colleagues noted they intended “to design a scheme that limits governmental rules and incentives to the extent necessary to achieve the objectives” of “universal coverage with financial assistance,” while allowing for a “vigorously competitive market.” In a recent Washington Post interview, Pauly reflected on the role of the individual mandate in their plan: “The purpose of it was to round up the stragglers who wouldn’t be brought in by subsidies.” Many conservatives including the Heritage Foundation endorsed the idea but now oppose it. However, the Republicans For Mandating Coverage, continue to support the individual mandate on the grounds that it reinforces the conservative principle of “personal responsibility” and argue its constitutionality on the basis of the Commerce and Necessary and Proper clauses.

So can ACA survive if the Supreme Court rules in unconstitutional? The Congressional Budget Office estimates a 50% reduction (PDF) in the number of insured if ACA is implemented without the mandate. Additionally, on average, those newly covered will on average be less healthy than those enrolled with a mandate, according to the CBO. Some researchers (Buettgens et al; Chandra et. al) suggest that based on health reform in Massachusetts (which provides the only available empirical data), the smaller federal government subsidies increase the importance of the individual mandate. Without the mandate, larger subsidies will likely be needed to provide sufficient incentive for healthy people to purchase health insurance.

But the Court could decide that the mandate is not severable. So without the mandate the entire law would be null and void. Then what? Do we start over again with a full commitment to the public option?

The battle over ACA is fundamentally about who we are as a nation. With 50 million of our fellow Americans with no access to affordable health care, government has the responsibility to insure the public’s welfare. With ACA we’re making progress on this front. The Court’s decision will signal how far we still have to go.