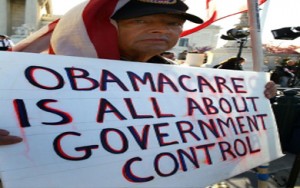 Medicare and Medicaid in 1965, the failure to win popular support for health care will be studied for many years to come. Racism has clearly emerged as a significant factor underlying opposition to the law and must be examined as part of any honest attempt at understanding how some Americans formed opinions about the Affordable Care Act.

For twenty years, the majority of Americans favored reforming the health care system. However, unlike during former President Clinton’s reform efforts in the early 1990s, support for the Affordable Care Act was not only sharply divided along ideological grounds, but by race as well. Former President Carter sparked a national debate with his September 2009 comments noting that racism was partly motivating tea party activists who staged widely-covered angry outbursts at town hall meetings hosted by members of Congress and anti-government protests that featured racially offensive signs denouncing Obama and the health care bill.

While President Obama refuted Carter’s claims, questions about the role of race continued. Indeed, in November 2009, 54 percent of adults indicated that race was at least a minor factor driving the opposition to President Obama’s policies. But since then, more studies have revealed the ugly truth behind why some are vehemently against “Obamacare” and see its passage as a threatening symbol of the power of the nation’s first black president.

Analysis of data from the American National Election Survey show prior to 2009, racial attitudes had a small, non-significant influence on white Americans’ opinion on whether “health care should be voluntarily left up to individuals.” As debate over Obama’s health care proposals increased, a significant change in racialization on health care opinions was observed, according to a study published in February by Micheal Tesler, a political scientist professor at Brown University. Antiblack stereotypes, which had no independent influence on preference for governmental insurance in March 2009, became a strong predictor of views on this issue by September of the same year.

Find reactions to this article on:

Additionally, Tesler found that when the same health care proposals were attributed to Obama as opposed to Clinton, racial resentment and antiblack stereotypes significantly reduced support for health care reform.

Demonstrating similar results with the economic stimulus package, these findings support Tesler’s argument that President Obama’s racial identity cues racial attitudes that “spillover” onto policies associated with him. These attitudes are activated despite the Affordable Care Act containing no explicit or implicit racial cues, according to Vanderbilt researchers Monique Lyle and Syndey Jones, who reported similar results as Tesler.

Lyle and Jones argue that because racial groups can activate strong, automatic emotional responses, such reactions to the health care law are believed to be triggered by cognitive associations that link Obama’s racial identity to negative perceptions about African Americans. These emotional responses influence evaluations of the law. Consistent with this theory, Knowles and colleagues found unconscious antiblack prejudice was associated with negative attitudes about Obama and diminishing support for his health reform plans.

The use of specific terms by the media and political leaders can also trigger associations about certain groups and thus shape public opinion. For example, “government spending” is synonymous with welfare to the public and is associated with blacks, the poor, homeless and other vulnerable groups (see Schneider and Jacoby). The extent to which these groups are believed to be responsible for their circumstances (and not disadvantaged by structural or social barriers) influences one’s opinion on whether the government should take steps to correct inequities in society.

It’s no secret that liberals and conservatives differ wildly on this front. The battle over health care has ignited emotions on both sides but has sparked a much more powerful response among those who want to preserve the status quo and push back against an expanded role for government, even if it means fighting against their own self interests. Whether driven by racial attitudes, the fear of “big government/socialism” or the loss of liberty, conservatives have succeeded in making the health care law unpopular, even though the majority of Americans like and want to keep many of its provisions.