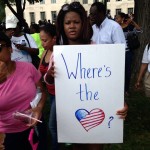 President Obama unexpectedly stepped into the Trayvon Martin controversy Friday afternoon, surprising members of press and the nation with his candid remarks on why so many African Americans are deeply pained by the killing of Trayvon Martin and the non-guilty verdict in the George Zimmerman trial. His remarks were especially poignant given his attempt to place […]

President Obama surprised the nation Friday afternoon when he unexpectedly preempted press secretary Jay Carney’s daily White House press briefing to deliver remarks on the aftermath of the George Zimmerman trial. I have an upcoming commentary on the speech but for now here it is in its entirety. In bold are the parts that I […]