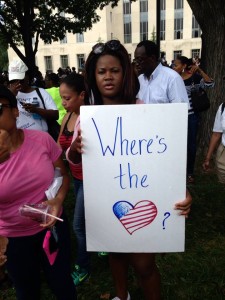 President Obama unexpectedly stepped into the Trayvon Martin controversy Friday afternoon, surprising members of press and the nation with his candid remarks on why so many African Americans are deeply pained by the killing of Trayvon Martin and the non-guilty verdict in the George Zimmerman trial. His remarks were especially poignant given his attempt to place events in historical context. The black community’s reaction to the murder of Trayvon Martin did not happen in a vacuum. It’s a reaction to a long history of violence and stereotyping perpetuated on blacks.

Like me, many I know did not expect the president to wade into the heated discussion occurring this past week. We assumed Obama’s reluctance to address matters of race would mean he would sit back and watch the discussion unfold. But the circumstances surrounding Trayvon’s death has activated strong emotions among many African Americans to an extent that it’s almost unhealthy to not say something. The anger is palpable and people want justice. Many wanted to see the president step up and acknowledge the anguish among blacks. Many, as this mom who I photographed at the Washington, DC Justice for Trayvon rally on July 20, want to know that there sons will not be next. While the president’s remarks alone can’t allay the fears that remain, they signal Obama’s willingness to engage an issue with which he, Attorney General Eric Holder and countless other black men have grappled.

In his speech the president also responded to those on the right who argue our concern for Trayvon and other black boys who may be profiled and presumed suspicious somehow negates a long-standing concern about violence in poor urban communities. Most of us know someone who is mentoring a young black male or volunteering in the community in the hopes of serving as a positive role model and steering them away from the streets. There is a long list of organizations committed to this effort. Moreover, many a black sociologists and other social scientists have devoted their lives to understanding the complexities of black urban life including the disproportionate engagement of black males with the criminal justice system. These problems are nuanced and not easily explained with sound bites.

This past week has brought a number of insightful articles and commentary on the historical and deeply personal context that has sparked protests and vigils across the country. W.E.B. Du Bois’ Souls of Black Folks, published in 1903, has been referenced by many including MSNBC host Melissa Harris-Perry in a column in The Nation last year, following the verdict, and by Michelle Alexander in her latest piece in Time magazine. In Souls, Du Bois begins with a poignant question, “how does it feel to be a problem?” Du Bois’ question is relevant in the current context because it is that very feeling of being looked upon with suspicion that prefaces it. Du Bois, a sociologist and co-founder of the NAACP, became so frustrated with the lack of progress on race relations and socioeconomic conditions for blacks, eventually moved to Ghana and renounced his citizenship. More than 100 years since the publication of Souls, African Americans are asking “where’s the love America?”

Du Bois was the first sociologist to take a comprehensive and scientific look at the condition of black people in America. He meticulously studied and documented the ways that racism and poverty intersect to limit the life chances and impact the health of blacks. While there are more college-educated African Americans than ever before, the economic progress for the black population as a whole has been relatively stagnate since 1970. In the wake of the Great Recession, we’ve seen a record loss in black wealth largely due to foreclosure. Unemployment, especially among black males remains unaddressed and is double that of whites. From high school graduation rates to health outcomes, black males experience a litany of disparities and disadvantages.

During his statement on Friday President Obama asked whether “there’s more that we can do to give [African American boys] the sense that their country cares about them and values them.” Black male role models as Obama suggested are important but policies that help address the systemic challenges facing black boys have been implemented at snail’s pace.

In the Urgency of Now, a 50-state report on black male education by the Schott Foundation for Public Education, the organization’s president and CEO, John Jackson, states that “Our nation’s current pace of institutionalizing the policy and programmatic supports to more positively affect the outcomes for Black males would cause any reasonable person, let alone the young boys and men themselves, to wonder whether our society truly desires to systemically change the conditions for Black males.”

So where do we go from here? It’s not difficult to conclude from recent events that things are falling apart or at least hanging by a thread. The response to the death of Trayvon Martin—Zimmerman not being arrested, the need for rallies in order to secure a trial and the not guilty verdict coupled with last month’s Supreme Court’s Voting Rights Act decision and the resurgence of anti-black sentiment following the election of President Obama have all fueled a sense that not only has progress stalled, but that we are moving back in time.

This year marks the 50th anniversary of milestone civil rights moments like the March on Washington. It may years from now also mark the renewal of a movement for justice and equality. If there is one good thing that has come from the aftermath of the Trayvon Martin tragedy it’s the displays of solidarity among blacks, whites, Latinos and other communities struck by the obvious miscarriage of justice. This may very well be the sign of a multiracial coalition springing up to bring about real change. If things are indeed falling apart, it will take all of us to pull them back together.

Judy Lubin is a writer and principal of Public Square Communications, a Washington, DC area health and policy advocacy consultancy. She is also a PhD candidate in sociology at Howard University. Like her Sociological Spin page at www.facebook.com/iamjudyubin and follow her on Twitter @judylubin.